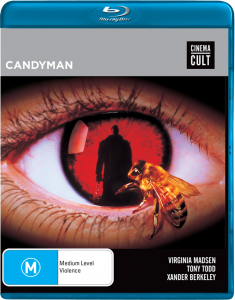 Cinema Cult’s release of Candyman could not have come at a better time, with the popular horror title turning 25-years-old just yesterday, officially cementing its status as a bona fide classic. I fondly remember the film being somewhat of a talking point among us kids in primary school, due to a ritual anyone can perform providing you’re within range of a mirror. Not only did revisiting Candyman last night bring back some of those memories, but reaffirmed my opinion that it’s so much more than its B-grade premise. Exploring the mythology of urban legends, a university grad student inadvertently summons a supernatural killer with a hook for a hand while researching local folk lore.

If you’re after something gruesome with buckets of blood, then you’ll certainly get it. However, it’s the belief and purpose of scary stories that serves as a central theme. While events that happen are real within the film’s reality, social behaviours are reflected off what has become legend; serving as an ominous deterrent for a child entering somewhere he/she shouldn’t, and a reminding us of prejudices towards those of a different class or race. Urban decay is captured at its most tragic and beautiful, with striking graffiti art and vandalism giving the film a lot character; set to a hauntingly classic theme composed by Philip Glass. Virginia Madsen is radiant as our victimised protagonist Helen, while Tony Todd is powerful and hypnotic in the titular role, showing no mercy as he violently quells skepticism.

Regardless of what you take away from Candyman, you’ll be thinking about him the next time you stand before a mirror, daring yourself to recite his name five times. You can find this back-catalogue favourite on DVD and Blu-ray online at Shock Entertainment.