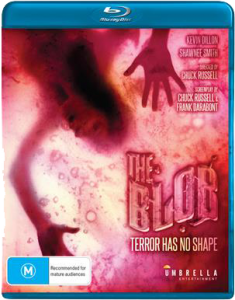 I can still remember quite vividly The Blob arriving at my local video store, fresh on VHS. An impressively sized standee stood at the counter and posters lined the front window, both of which prominently featured a human’s arm desperately reaching out from inside an ominous pink mass. As a cinematically curious five-year-old the idea a shapeless monster not only scared me green but was impossible to comprehend. Regarded as one of the best remakes ever made, this film centres on a small California town terrorised by a strange life form that consumes everything in its path, rapidly growing in both size and ferocity.

Released previously by Twilight Time back in October of 2014, The Blob has re-emerged on DVD and Blu-ray thanks to the efforts of Umbrella Entertainment, currently the only label distributing a HD edition of the cult favourite. While the original classic from 1958 is often regarded as a metaphor representing the fear of Communism during the 1950s, the 80s re-hash serves more as a creature-feature but does offer an interpretive nature in regards to the unknown antagonist. Is the Blob symbolic of the mass consumption of our natural resources, or perhaps man’s underlying desire for destruction? No matter how you view the film there’s plenty to enjoy, be it the gory deaths, the alternative characters or the specials effects; which despite looking somewhat dated at times are a nice throwback back to what came previously. Umbrella have produced a worthy release, with picture and sound being of their usual high standard. Although there isn’t much in the way of bonus content, a candid 18-minute interview with the film’s director, Chuck Russell is something I’m sure fans will find insightful and informative.

Twenty-eight years after The Blob oozed its way into theatres the memory of my first encounter with what came from outer space still evokes those same feelings I felt a child, captivated by what will always be a terrifying concept.