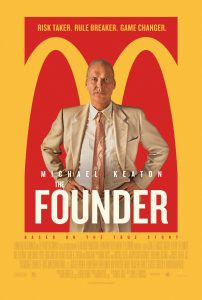 I’ve had a love/hate relationship with McDonald’s during my adult life. Vowing never to go back due to a suspected case of food poisoning to recently discover the bee’s knees of burgers in the form a Double Quarter Pounder with cheese. The latest test in my volatile romance with the fast-food giant comes in the form of The Founder, a fascinating biographical drama that chronicles the story behind McDonald’s founder, Ray Kroc.

Portrayed fabulously by Michael Keaton, Ray’s journey from a struggling on-the-road salesman to a ruthless corporate businessman serves as an in-depth character study of a man drastically transformed by unprecedented success. The sympathy we feel towards Kroc during the initial stages of the film are slowly off-set by the shift in his behaviour and the treatment of those around him, mainly his devoted wife and brothers Dick and Mac McDonald who are the unwilling catalysts of this whole saga. One of the more fascinating aspects is witnessing how the idea and basic structure of fast-foods service came to be and what a well-oiled machine it truly is; with rhythmic sequences demonstrating its functionality in a highly positive manner. Performances and characterisations of the central figures lend itself to film’s almost sporadic tone and offer a nice variety for audiences. Nick Offerman and John Carroll Lynch are extremely likable and fantastic to watch as the McDonald brothers while Michael Keaton teeters brilliantly on the line between hero and villain as the cancerous Kroc. Credit almost must go to Laura Dern who is elegantly poignant as Kroc’s long-suffering wife, Ethel.

Among the moral ambiguity The Founder explores, it’s an entertaining movie that admittedly left a sour taste in my mouth regarding the Golden Arches, but after a week or so I’ll no doubt be doing back-flips over the thought of some delicious Chicken McNuggets.