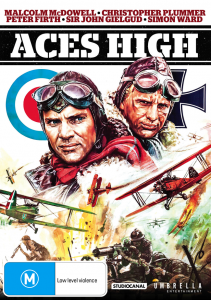 During the four devastating years of World War I, aerial combat was a daring new means of inflicting damage on the enemy, but was a fragile state of existence for those who took to the skies. New to DVD from Umbrella Entertainment, the action/drama Aces High shows the enormous strain placed upon a squadron of the Royal Flying Corps by the high casually rate among rookie pilots.

Malcolm McDowell stars as Gresham, the most accomplished and experienced of his fellow airmen, but not immune to the anxiety that comes with his almost daily duty, so he turns to alcohol in order to cope. With the arrival of a fresh pilot named Croft (Peter Firth), a friend and former school mate of Gresham’s, the already tense situation is only exacerbated as Croft’s rite of passage to fighting soldier begins. Made on budget of only ₤1,250,000, the film is quite impressive on a technical level with action sequences providing realism and exceptional aerial stunt work, giving audience an accurate depiction of high altitude conflict. During the many lulls between flight missions, time is spent getting to know the characters who regularly embark on nightly celebrations which serve the men well in masking their mounting fears of one day never returning. Performances from the cast are strong, particularly Malcolm McDowell and Peter Firth, along with Christopher Plummer who is a notable presence as compassionate senior officer, Sinclair.

Aces High shows the futility of war remarkably well for a film with limited means. You can feel the lingering sadness and despair among the comradery and the melancholy that takes hold when another life is taken within the blink of an eye.