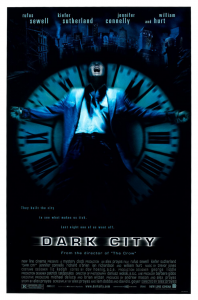 As the second month of 2018 comes to an end, you may be surprised to know that Alex Proyas’ Dark City turned twenty-years-old, one of a number of films I was exposed to as a teenager and aspiring film buff by Foxtel’s annoyingly repetitive schedule. Like many films that’ve gone to achieve widespread acclaim, this American/Australian feature did not perform well during its theatrical run and while I admit the subject matter was lost initially lost on me, it was unlike anything I’d seen before. I credit my adolescent crush on Jennifer Connelly with bringing me back to Dark City where I quickly became immersed in a nightmarish vision under the ambient glow of a neo-noir aesthetic.

Struggling with the memories of his past, John Murdoch (Rufus Sewell) is a man out of step with the world, one that is seemingly fixed in an endless night. His search for answers and true identity lead him to discover a reality he could not have possibly imagined. Widely interpreted as an allegory for imprisonment, there’s a relatable portrayal of everyday life and how monotonous tasks have made us slaves to routine, often blinding us to what is painfully obvious to those looking in from afar. Adopting a prominent German expressionist depiction suits the themes of repression and control of a mechanism society perfectly, presenting parallels to Fritz Lang’s Metropolis, undeniably a significant influence in Proyas’ screenplay. Supporting character serves well as representing key element to the story and accompanying themes such as Jennifer Connelly as John’s wife whom he doesn’t remember, William Hurt as an inquisitive police detective and Kiefer Sutherland as the eccentric Dr. Schreiber, an instrument of the ruling body that keeps watch from within the shadows.

There’s much to dissect and analyse in Dark City, which many have done over the subsequent years following its release, and in a much more eloquent and academic way than I’m capable, but I couldn’t pass the occasion of this milestone anniversary without giving some of my own personal thoughts and opinions. If I can offer any suggestion to those who are yet to see the film, seek out the director’s cut on Blu-ray for the full experience.