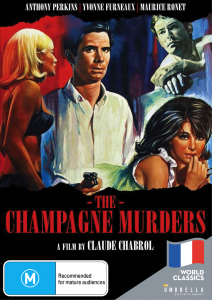 Expanding their catalogue of World Classics, premium Australian label Umbrella Entertainment have added the rather sophisticated French mystery The Champagne Murders (Le scandale) from genre master Claude Chabrol. Following a trio of social high-flyers, the business partner of a champagne tycoon is being framed for a number of grisly murders, at a loss of who is behind the deadly plot.

Released under Universal Pictures in the United States, this foreign title presents itself largely as a Hollywood type affair, but adopts a style clearly influenced by Alfred Hitchcock of whom Chabrol is a great admirer. While I admit to being a little confused by the plot due to the dialogue heavy script, our three principal characters are each interesting personalities and figuring out what makes them tick is where most of the film’s enjoyment comes from. Leading man Anthony Perkins seems at ease playing the gigolo-type Christopher, husband to his assertive and business woman wife Christine, frustrated by both her spouse and partner Paul’s frivolous activities.

Available only on DVD, The Champagne Murders boasts an exceptional transfer for the aging format and the title’s cover art retains a classic cinema quality, which is a definite stand out among the generic appearance often of found with many modern releases. If you’re looking to add variety to your movie collection that spans the oceans, then this title is well worth considering along with many others currently sold thought Umbrella Entertainment.