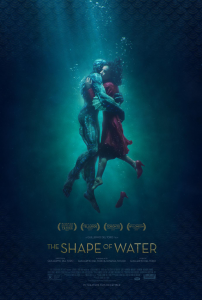 Without a doubt this past Valentine’s Day was certainly one for the books. After a tedious drive to an area of Melbourne which felt equivalent to the “outer rim” in Star Wars, my girlfriend and I found ourselves in inside Westfield Southland’s semi-luxurious and intimate Europa Cinema to catch one of the final showings of Guillermo del Toro’s The Shape of Water, which in case you didn’t know already, has scored a staggering 13 Oscar Nominations including Best Picture. Within the uninviting walls of a secret research facility, lonely mute janitor, Elisa, finds a kindred spirit in the likes of an amphibious creature being held captive. It isn’t long before their bond develops into a relationship, which has a profound effect on those around them.

Set during the early 1960s, widespread prejudice and discrimination coupled with the intense rivalry between the United States and the emerging Soviet Union have alienated many individuals who are deemed different by society. This loneliness or silent despair is felt by our morally sound characters and is symbolised in a subtle yet touching manner with the colour green in various forms, the primary shade of the films gorgeous pallet. Visual style almost feels like a character within itself, which arching back to the distinctive architecture and technical commentary often seen in classic monster movies; even our mysterious creature bears a striking resemblance to the prehistoric Gill-man from the Black Lagoon. On the other hand, a number of civilian locations beautifully encapsulate the romantic sentiments of old Hollywood pictures, a prominent mood befitting to the blossoming love between the unconventional pair.  Sally Hawkins is remarkable as Elisa in a performance that speaks volumes despite an absence of audible dialog, her compassion and kindness is a wonderfully offsets the films darker nature, which stems from the film’s central villain the intimidating and peculiar Colonel Strickland, played to a tee by Michael Shannon.

Like much of Guillermo del Toro’s previous work, The Shape of Water is a unique piece of cinema about the best and worst of human kind; an artistic mash of genres culminating in an experience unlike any you’ll have in theatres this year.