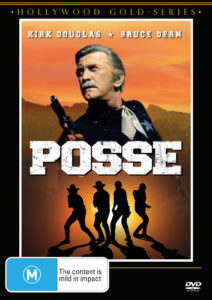 Kirk Douglas tried his hand at directing in the mid-1970s, first with the jovial adventure-western Peg Leg, Musket & Sabre (1973). Following its poor reception, he made a second attempt, this time with the grittier revisionist-western, Posse, that’s returned to DVD in Australia through Shock Entertainment under the label’s ‘Hollywood Gold Series’.

Howard Nightingale (Kirk Douglas), an accomplished and renowned marshal has thrown his hat in the race for state senator and hopes his capture of “violent train robber”, Jack Strawhorn (Bruce Den) will win the people’s trust and confidence but is it all smoke and mirrors?

I had a lot of fun watching Posse, which is a tight and well-executed 88-minute ride that blurs the lines and breaks conventions of how protagonists and antagonists are presented to audiences. It’s not long into the movie when we realise that Nightingale is far from a saint and that Strawhorn isn’t the devil he’s made out to be. In the railroad’s pocket, Nightingale believes his own legend and with an unchecked ego to boot, he appears to be a prime candidate. However, Strawhorn sees through the fake persona and spends a good portion of the film working to make sure everyone else does too and has a literal blast doing so, partly involving to a speedy locomotive in reverse. I’m personally not the biggest fan of Douglas, but I really have to give him credit as a director in the case of Posse, for giving us what we love about the genre while adding some ambiguity and exploring the moral compass of an ‘old West’ that’s slowly modernising. I also have to commend Douglas for really putting over Bruce Dern as the film’s anti-hero, and together both actors are at their best in their respective roles. Speaking in terms of content the film it itself has some real bite to it, which has clearly been made in line with contemporary 70s filmmaking and the much harsher level of violence makes the more typically Hollywood Western pale in comparison.

Posse is yet to be released on Blu-ray, only Mario Van Peebles’ loose remake, for some reason. Fortunately for us classic western fans, this release from Shock comes via a direct port from the original Paramount DVD. Complete with all the supplements, subtitles are available in ten different languages, plus ‘English for the Hearing Impaired’, in addition to five audio tracks in English, German, French, Spanish and Italian. Presented in 1.77:1 the image is pretty decent and looked quite sharp for standard definition when viewed on 46” LCD screen, the 2.0 Dolby Mono track is a little low in volume but still achieves a subtle surround sound effect. While we’re without an HD treatment, this re-issued DVD is more than adequate and should not be shrugged off. 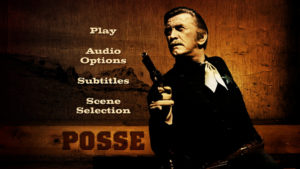 If you Google the film’s theatrical post, you’ll likely see a tag-line which reads, “Posse begins like most westerns. It ends like none of them. It will knock you off your horse.” If that’s not a perfect summary, I don’t know what is. If you love westerns, you have to see Posse. Kirk Douglas was pushing 60 when the film hit theatres and he passed away just last February. Think about that for a moment and be grateful that Bruce Dern is still with us.