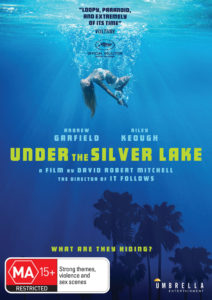 A24 is the indie film house that’s all the rage among movie-goers, particular those of a younger demographic. One of the studio’s most recent low-key features is Under the Silver Lake, which had a brief run in cinemas earlier this year through Umbrella Entertainment and has since arrived on DVD. In the style for classic film-noir from the 1940s and its renaissance during the 1970s, a presumably unemployed young man, Sam, becomes obsessed with mysterious girl staying at his apartment complex who vanishes the night after their brief encounter. Upon his search for answers, Sam stumbles into a bizarre world of conspiracy, or so he thinks.

Unlike the stoic private detectives that would stand centre stage in the genre’s most beloved titles, Sam is no Samuel Spade nor is he Jake Gittes. He’s more Elliot Gould’s incarnation of Phillip Marlow, but without any skill. In a perpetual state of somewhere between stoned and overslept, Sam’s wanderings take him to various social gatherings and parties, all with a distinctive hipster vibe that layers the film’s social dynamic. Nonsensical at times, the convoluted plot, which is no doubt on purpose, serves in part as a jestful jab at some of the classics that were more complex than they needed to be. Although, this intended confusion speaks about obsessive minds and how they find clues or secret messages in any shape or form, regardless if they’re real or not. Andrew Garfield is our chill protagonist, Sam, who looks as though he may have embraced the character a little too much, but his performance and the film overall is all the better for it. His journey is loopy and sporadic as he mingles within the unique culture of LA’s nightlife, never really knowing where it will take him. Riley Keough as the elusive Sarah embodies many of the traits found in her 1940s counterparts but has a very modern sensibility. With her screen time being very limited, it only adds to the mystery. The film noir aesthetic is very prominent throughout with great use of silhouette, shadows and the radiant glow of night photography encompassing the warm nights of summer. Even with the bloated runtime of 139 minutes, I never felt bored because I had no idea what to expect and furthermore it’s simply just a nice film to look at on a visual level; you almost feel part of the environment.

Under the Silver Lake is a film that needs bonus material, just to hear other interpretations of the story, but unfortunately, this DVD is a bare-bones affair lacking even a menu for introductory purposes. However, it’s probably one of the best looking DVDs on the market with great picture, mostly a result of the film’s Hollywood setting, and strong sound. Presented in 2.35:1 widescreen, both day and night scenes are rich with bright colours, the latter having a very illuminated quality, which could be in part due to light pollution. Nevertheless, the disc is very vibrant and is very immersive in Dolby 5.1 accentuating the hipster style soundtrack and the throwback musical scoring.

Despite deserving of a better home release, I have to credit Umbrella Entertainment for at least bringing Under the Silver Lake to the big screen here in Australia, a film that could have very easily skipped a theatrical run. Littered with clues and Easter eggs, the film has an almost self-aware quality as a visit to its subreddit page will certainly prove, with fans divulging theory after theory.