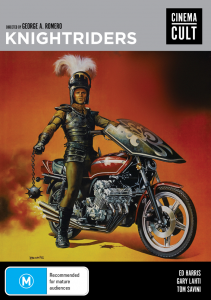 It’s always interesting when a director known for a particular genre suddenly deviates or changes from their usual style and subject matter. However, there’s the risk of these ambitious projects becoming overlooked. I feel this is the case for George A. Romero’s Knightriders, a unique and personal drama nestled between Dawn of the Dead and Creepshow, which follows a traveling medieval re-enactment troupe that begins to fracture when outside factors and disillusionment among several of its tight-knit members takes hold.

Despite some scenes of an unpleasant nature, Knightriders is an overall positive film experience centred around ideals and community, embodied by our main protagonist Billy, played by Ed Harris in what was his first leading role. Referred to as LARP (Live Action Role- play) in this day and age of over abbreviation, Billy takes the theatrics and position as the troupe’s leader aka “King” very much to heart, living by the sword so to speak. His chosen path could easily be interpreted as someone who is cleansing themselves of traumatic events or difficult periods earlier in life. Humanising sentiments such as these give the film a lot of heart and make the journey of not only Billy’s, but his followers profoundly impactful to the audience. Supporting players round out the cast of characters, providing variety and differing views on the group’s situation, most notably Tom Savini as the heir apparent Morgan, the rock-star among his fellow knights who is seduced by the promise of fame from opportunistic entertainment agents.

Knightriders was an early release on DVD from Australian distributor Cinema Cult and while it’s unfortunately no longer in print, there’s a fair chance you might stumble across a copy inside specialty stores for cinematic obscurities, like my girlfriend and I did during a drive out in the sticks.