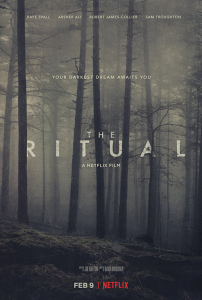 Three years ago when Netflix officially arrived in Australia the underwhelming amount of content in comparison to the paradise of choice enjoyed elsewhere barely justified the monthly subscription fee. Now I feel the streaming service earns its keep every time I log in, with new titles appearing almost daily. One of the latest acquisitions is The Ritual, a small British horror film that enjoyed a decent run in cinemas late last year, which follows four college friends on a hike among the untouched beauty of Sweden. Upon taking a short cut through a nearby forest, they soon realise they’re not alone.

With common tropes and similarities to what has come before being very apparent, this latest offering of wilderness horror sticks to what makes the popular sub-genre so effective, by stoking the flames of an imagination ready to go haywire. Furthermore, the natural canopy of our dark forbidding forest harbours a feeling of being “not quite reality”, to appropriately quote Joshua Leonard from The Blair Witch Project, highly befitting to the unseen presence that stalks from between the tress. Our protagonists consist of rather typical archetypes, but each deliver convincing performances and are relatable to some degree, especially their reactions and response to something that is clearly beyond their understanding.

The Ritual owes much of its basis to Nordic lore and the satanic themed horror which cinema has exploited for decades, so draw the curtains, turn off the lights because it’s into the woods we go.