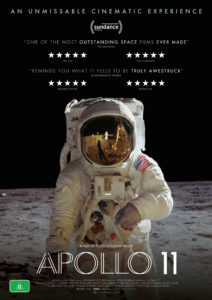 Special event screenings are a rarity at my local cinema. However, the 50th anniversary of the when man first set foot on the moon managed to warrant a one-night-only screening of the documentary feature Apollo 11, distributed across Australia through Madman Films. Consisting solely of archival footage, including an immaculate 70mm film previous unreleased to the public, a narration free journey takes audiences from launch to re-entry with astronauts Neil Armstrong, Buzz Aldrin and Michael Collins.

Seated just two rows from the front, it seemed only appropriate that I was forced to look up at the screen, which made the towering Saturn V rocket an even more impressive sight as it shot into the heavens. I’ve been enamoured with the planets and the early days of space exploration for most of my life, and while I’ve seen a sizeable portion of NASA’s archival footage, the collection presented in Apollo 11 is, pardon the pun, truly out of this world. With the clock anxiously ticking down, the hours leading up to the mission’s launch serves as a vibrant time capsule of late 60s America. People from all walks of life ascended on Cape Canaveral to witness the momentous occasion as NASA personnel worked tirelessly to ensure our astronauts embark on a safe flight. While visually impressive on its own, significant portions of the footage are subject to some immersive audio enhancements, but are authentic nonetheless; leaving radio communications to tell the story. It’s astounding how composed Armstrong, Aldrin and Collins are during their mission. Levels of excitement and worry are measured only by scheduled read-outs of their varied heart rates, which prompted some light laughter from the audience. Whilst on the lunar surface, brief moments of the moon’s tranquil beauty, much like how Armstrong described, are experienced via the stunning footage that was able to be captured, echoing the collective spirit of all mankind.

Apollo 11 may only give us an ounce what it must have felt to be those three courageous souls, but an ounce immeasurable in terms of what was achieved; a staggering feet in technological evolution, amounting to a solemn moment of world peace.