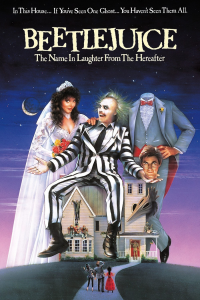 Tim Burton was sent several scripts following the success of his directorial debut feature Pee-wee’s Big Adventure, but quickly became disheartened by their lack of imagination and originality; then came a script from novelist and screenwriter Michal McDowell, whom Stephen King had once called “the finest writer of paperback originals in America today”. Delighted by what McDowell had conceived, Burton agreed to direct, although the script was rewritten to some extent following production.

Recently deceased couple Adam and Barbara Maitland find their idyllic, but now vacant Connecticut home occupied by an obnoxious family from New York. Not ready to let go of their once cherished home, they hire a troublesome “bio-exorcist” to get rid of the unwanted residents.

I’ve always had an appreciation for Beetlejuice, despite it being a beloved classic that has never gelled with me 100%. Visually there’s nothing else in cinema quite like it, treating audiences to an array of colours, unique set design and numerous “how did they do that?” moments; suffice to say it’s arguably the most ‘Tim Burton’ of Tim Burton movies, alongside Edward Scissorhands. Michael Keaton reaches his comedic pinnacle as the otherworldly menace, a true showcase of his spontaneous flare for physical performance, inspired by his idol and professional namesake Buster Keaton. Sixth sensed teenager Lydia, played by 16-year-old Winona Ryder, is subtly amusing through her grim outlook, a character who has since become a poster girl for horror fans. Our two lead protagonists, Alec Baldwin and Gena Davis are both fine as Adam and Barbara, but the remaining cast of supporting players aren’t nearly as entertaining and the story falters during the film’s second half, despite the famous Calypso dinner scene.

Beetlejuice opened in U.S. theatres thirty years ago today, becoming a critical and commercial success for Warner Bros and Tim Burton, even picking up the Oscar for Best Makeup at the 61st Academy Awards in March of 1989. Revisiting the bombastic comedy last night, I’m impressed by how well it stands up on a creative level, a film that should be looked upon as a monumental work of art.