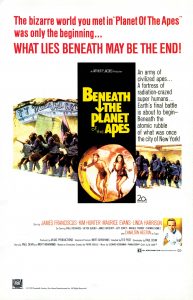 While my parents entertained guests outside, preparing to usher in the new millennium, I spent the last night of the 20th century cooped up in my bedroom with two VHS titles I had rented earlier that day, Beneath the Planet of the Apes and Escape from the Planet of the Apes. Eager to see what happens after Taylor’s grim realization at the original film’s climax, I pressed play and stat poised with excitement, eyes fixed on a modest 34cm TV.

After a devastating crash landing, astronaut Brent, the sole survivor of a rescue mission searches for Taylor, who has disappeared into the “Forbidden Zone”, a baron region outside the realm of the apes. He not only soon discovers the intelligent primates ruling the planet, but telepathic humans who occupy an underground city. I’ve always considered Beneath the Planet of the Apes as a decent follow up and while the film is a few notches down in terms of overall production from its famed predecessor, the primary goal is still to entertain and intrigue audiences. Certain plot elements steer the narrative into B movie territory, which isn’t a hindrance in my eyes, as it only adds to the level of sci-fi fantasy prominent throughout the franchise. Stepping into the leading role of Brent is James Franciscus, a popular TV actor at the time. He makes great strides in his performance to set himself apart from Charlton Heston’s Taylor, who returns in only a limited capacity. Other familiar faces make a notable appearances including Dr. Zaius, played again by Maurice Evans, along with Zira and Cornelius. The film’s main antagonist is a gorilla general named Ursus, a tyrannical leader who rages an all-out war against the humans dwelling beneath the Forbidden Zone, mirroring real-life military campaigns that have been instigated under a rather ignorant basis. Despite the aggressive stance this first sequel takes, it’s worthy of its place within the Planet of the Apes universe.

As the clock struck midnight the world was unscathed by Y2K and Beneath the Planet of the Apes ended on a surprisingly somber note. Undeterred, my next cinematic adventure involving those “Damn dirty ape!” was waiting.