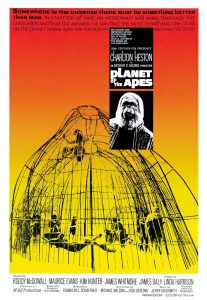 In one month’s time, War for the Planet of the Apes will hit cinemas across Australia, capping off what has so far been a well-executed and captivating trilogy, receiving universal praise from fans of the franchise and critics alike. Now I want to share with you my thoughts on where it all started by taking a look at my all-time favourite film, the original Planet of the Apes from 1968. Prior to seeing the sci-fi classic, all I knew about the movie came from obscure TV and film references, mostly notable that scene at the end of Spaceballs, which in retrospect turned out to be a major spoiler. I finally sat down to watch it when I was in my mid-teens, back in December of 1999. I’m not exactly sure what it is about Planet of the Apes that resonates so strongly with me, but I can tell you that my perception of cinema was changed from that point onwards, completely altering not only my viewing habits, but the way I watch movies.

For those of you who are unfamiliar with this landmark title, it was adapted from French author Pierre Boulle’s 1963 novel La Planète des Singes and tells of three astronauts who crash-land on a seemingly desolate planet far in the distant future where intelligent and highly evolved apes are the dominate species over humans; mute savages, oppressed and enslaved by their simian masters. Charlton Heston plays the main protagonist, Taylor, an arrogant individual disillusioned with the world he left behind only to be humbled through the most bizarre of experiences when captured by the ape’s military faction. Husband and wife chimpanzee scientists, Cornelius and Zira, (Roddy McDowall and Kim Hunter) are sympathetic to Taylor’s plight, while trying to defend his obvious intelligent qualities, namely speech, to the orangutan administrators and politicians, led by the fearful Dr. Zaius, played by Maurice Evans. The ape’s society eerily mirrors our own where we have politicians much like the orangutans who blindly follow laws and a military often ignorant to the needs of those they oppress. Taylor’s pessimism serves as a reflection of the film’s era of change social upheaval where many like Taylor were weary of the establishment. These social-political themes carry over into the later films, giving the Planet of the Apes franchise an on-going relevance to this day.

Pouring through my parent’s living room window are gentle beans of late afternoon sunlight after a day of intense summer heat, the remnants of which I can see radiating off the pavement. I hold my breath for a moment, unsure whether or not the VCR will play the badly aged rental tape I just eagerly inserted. These are the memories that run through my head every time before I lose myself in one of greatest movies ever made, accompanied by Jerry Goldsmith’s distinctive score, signifying the beginning of my journey.