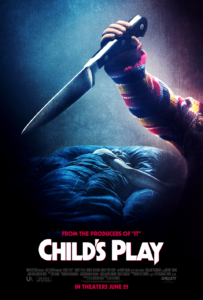 Chucky’s prowess as an evil doll has been the horror icon’s most enduring quality and optimum supply of nightmare fuel for countless movie-goers over the past thirty years. With six sequels to its name, of varied quality, a remake of the original Child’s Play was the next logical step, but thankfully creative freedom was exercised instead of the often literal approach by filmmakers. Much like its late 80s predecessor, a young boy receives a toy doll for as a birthday gift, which turns out to be far less wholesome as advertised.

If you’re expecting an all-out ride of pint-size horror, I doubt you’ll be disappointed, but Child’s Play is also a highly relevant commentary on the widespread embracement of smart devices. Chucky represents our almost blind willingness of letting them into our home to take control, serving up a frightening element of reality. Marketed to youngsters as a line of high-tech dolls called Buddi, they’re the perfect bridge between the multinational Kaslan Corporation (aka Google) and impressionable minds. Chucky’s defective A.I allows him to absorb information and learn without restriction, which is how the “evil” element comes into play. Our story takes place within the high-rise slums of a major city, where 13-year-old Andy and his peers are subject to boredom and unstable home lives, taking solace in videos games, smartphone and watching movies to escape the effect of their rather drab environment. Chucky’s introduction and villainous development is executed in darkly comedic fashion, which is largely due to Mark Hamill’s fantastic voice work and some finely tuned traditional-style animatronics. On-screen carnage comes directly inspired by a certain Tobe Hooper classic with blood and gore taking centre stage more than I expected and the film’s climax is reminiscent to that of the popular sequel, Child’s Play 2, which I’m sure fans will appreciate. Performances are generally solid from the leading and supporting cast, such as Aubrey Plaza as Andy’s mother, a role I would have not pictured the actress in, but she’s convincing as a single parent. Gabriel Bateman is sympathetic as Andy, capturing the sensitivity of an early teen while forming a Goonie-esque bond with neighbourhood kids Falyn and Pugg, play by Beatrice Kitsos and Ty Consiglio.

I enjoyed Child’s Play for both its familiarity with old-school horror and a new direction for the iconic character. It’s a fun and easy viewing experience, which begs the question of who’s actually in control, us or the technology design to serve us?