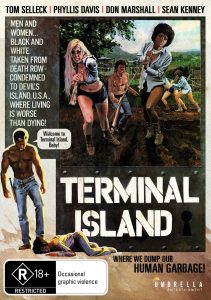 Umbrella Entertainment are developing quite the knack for selecting cult titles to join their ever expanding catalogue of obscure cinema. One of the latest is Terminal Island; an action thriller in which convicted murders are dumped on an off shore island, established after abolition of the death penalty. When the newest inmate arrives, a hot-tempered young woman named Carmen, a civil war soon erupts between the island’s two main factions, a violent dictatorship and a compassionate minority determined to live freely.

While the feasibility and moral issues surround the death penalty continues to be debated, the solution we’re present with in this film is not one to be taken seriously, although some pros and cons of one such scenario do present themselves, begging the question of why should those who choose not be a part of civilized society, burden us with the expense of imprisonment or lawful execution? Like many titles within the realms of exploitation cinema, there’s a casual and frivolous nature to Terminal Island that make it’s easy for viewers to enjoy despite the numerous gaps in logic and practicality that are regularly demonstrated by our criminal characters. Much of the action is derived from spontaneous moments of rather sloppy hand-to-hand combat, off-set by a fair portion of sleaze and nudity. There’s not much to comment on other than the fact that there’s rarely a dull moment throughout.

Given the content in Terminal Island, I was surprised to learn it was directed by a woman, but it’s clear Stephanie Rothman knows the genre well and why many movie-goers responded it so enthusiastically. You can purchase this harsh tale of incarceration on DVD in stores and online from tomorrow. July 5th.