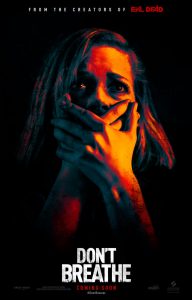 Do generic statements like “Scariest film of the year!” entice you to see the latest hit in horror cinema or do you role your eyes at the bold suggestion? While hard to ignore, I would rather let the film’s premise delivers its pitch, so I find myself somewhere in the middle in answering that question. Either way it hasn’t stopped movie-goer’s from flocking to see Don’t Breathe which opened this past Thursday across Australia. In this second feature from noted director Fede Alvarez, three amateur thieves break into the house of a blind man intending to walk away with a substantial pile of cash. Little do they know that their handicapped victim is far from helpless; isolated within an all but abandoned neighbourhood in Detroit.

It’s amazing how adding one simple element can elevate a film from being predictable and routine to something really interesting. The remaining senses of our visual impaired antagonist is the crux of the film’s ability in heightening tension and unease as the three young intruders find themselves at a deadly disadvantage despite their numbers. While not overtly scary in a conventional manner of speaking, Don’t Breathe is certainly a thrilling experience which plunges viewers into an almost other worldly setting where sensory deprivation is the norm. Characters initially present an interesting dilemma in regards to who is worthy of your empathy in light of their unlawful acts. However, that quickly becomes clear through a glimpse at the domestic situation of the film’s female lead, Rocky, portrayed by Jane Levy who gives a genuinely rough performance. Veteran actor Stephen Lang is deceivingly dangerous as “The Blind Man”; his impressive physique and animal like aggressiveness makes for one very intimidating presence.

With horror movies seemingly becoming more hit and miss with mainstream audiences, Don’t Breathe hits a lot of right notes so catch it theatres while you can, the darker the better.