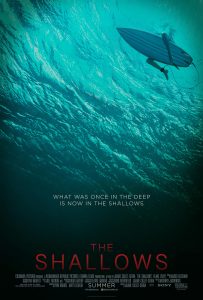 myself that I wouldn’t watch anything other than the teaser trailer, but like many movies we’re excited to see, temptations can often get the better of us. In retrospect I think the Columbia Pictures’ promotional campaign for The Shallows unfortunately hindered my viewing experience; there was simply too much given away for a premise that could not have been simpler. It’s a deadly case of ‘so close, yet so far’ for a Nancy (Blake Lively), a surfer who finds herself stuck just a mere 200 meters off shore from a secluded beach while at the mercy of a great white shark. What follows is an intense battle of wills and a desperate fight for survival.

When any new shark film emerges it’s only natural to draw comparison to Steven Spielberg’s Jaws, but apart from one noticeable reference to its first sequel, The Shallows manages to hold its own well and is a film very much made for cinema screens. However, it was the little things that bothered me, such as character tropes that mirror the protagonist’s dire situation. I feel that approach has become very synonymous with the survival-horror genre, bringing nothing really interesting except for a feeling of routine. The shark itself is very menacing; its sheer ferocity alludes to an almost evil quality which definitely works in the film’s horrific context, although these underwater beasts are naturally terrifying so I think the film would have been just as effective if it opted for a more realistic portrayal. Picturesque cinematography worthy of an IMAX documentary captures the location’s tropical and vibrant colour pallet along with the tranquil beauty of marine life, which exists in perfect harmony with the limited human visitors as expressed primarily through Nancy. Blake Lively carries the film through a convincing performance, one that embodied the seriousness of her unforeseen dilemma.

While it won’t redefine any genres or film-making standards, The Shallows is an entertaining popcorn flick perfect for those who enjoy a good scare and perhaps even the odd laugh.