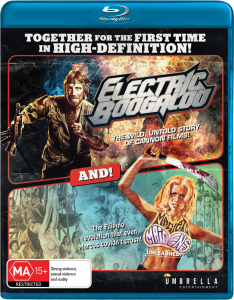 Never has there been a history lesson in film so wildly entertaining thanks to Australian film-maker Mark Hartley, who in recent years has put together two exceptional documentary features that explore the goings-on behind two distinctive and ethically questionable eras of cinema. Together for the first time and presented in high-definition, Umbrella Entertainment have packaged both Electric Boogaloo: The Wild, Untold Story of Cannon Films and Machete Maidens Unleashed! for our viewing pleasure.

While both pieces discuss similar types of film, the circumstances surrounding their production are literally worlds apart. Projected in Electric Boogaloo is the story of two Palestinian brothers Yoram and Menahem Golan, who founded the widely popular and heavily scrutinised production company “The Cannon Group”, which specialised in often cheap, fanciful and action oriented movies that catered to a large portion of the mainstream American film market, mostly throughout the 1980s. On the other hand, Machete Maidens tells of the almost sanction-free film-making paradise present in the Philippines, where producers and directors would often butt heads over the exploitation romps they were churning out, while reaping the benefits of a cost-effective and exotic location. Whether you enjoy these unique brands of films or not, the retrospective look on both periods are of a fun celebratory nature despite all the controversy and misgivings that once existed.

Special features give you plenty of extra bang for your buck, which include extended interviews, audio commentaries, deleted scenes and trailer compiles. More than enough bonus content to keep your entertained long after your education of everything simultaneously wrong and awesome about alternative movie-making.

If you think you know your favourite movies, then you’re in for a surprise. Electric Boogaloo and Machete Maidens were three of the most enlightening hours I’ve had in a very long time. You can find this Blu-ray double-bill online and in retailers officially from Wednesday, April 5th.