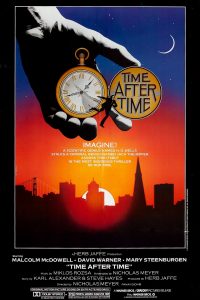 There’s no denying that movies are an effective way of making a statement, be it political, social, environmental etc. It’s an approach that’s being utilized more than ever in this increasingly connected world; so it’s rare when I watch a film that caters to the fundamental aim of simply entertaining the viewer by telling a fantastical story. Nicolas’s Meyer’s Time After Time is one such motion-picture, in which H.G. Wells (Malcolm McDowell) travels to present day San Francisco in pursuit of Jack the Ripper (David Warner), who uses the writer’s time machine to escape the authorities from the late nineteenth century.

For such an off-the wall idea, Steven Haynes’s original story is perfectly adapted to the big screen, which in large part due the quality of writing. While a rather sinister element features regularly throughout, it’s the film’s lighter tone and fish-out-of-water scenario that provides the most pleasure for audiences, often in the form of a number of humorous sequences. Malcolm McDowell is well cast as the prolific writer, who effortlessly makes light of his situation as an English gentleman thrust among the brash citizens of a bustling modern metropolis. His charm and charisma could not be more evident than in the scenes with his female co-star, Marty Steenburgen, who plays a liberated bank teller and Wells’ romantic interest. Their delightful on-screen romance spilled over into reality as the two became married the year following Time After Time’s release. David Warner excels as the suave blood-thirsty antagonist and is far from above rockin’ a pair of flared pants at a disco-tech while on the prowl for young potential victims.

Without sounding too cheesy, I wish I could go back and experience the joy I had watching Time After Time with my girlfriend for the very first time. Not since childhood have I been so enchanted by the magic of movies.