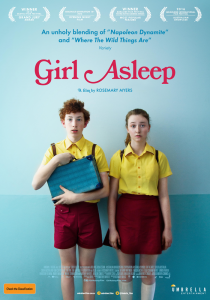 Umbrella Entertainment have recently launched their very own “On Demand” streaming service, available through their official web site. Offering a wide variety of a titles released under the popular distributor, I was very pleased to see a clear focus on Australian films, many of which are harder to find on other services. Powered by Vimeo, all Umbrella titles can be viewed in both Australia and New Zealand. However, not all can be viewed worldwide, although fortunately a large portion can.

This past Sunday I took the opportunity to test-drive Umbrella On Demand by watching the highly unique and imaginative Aussie comedy/fantasy, Girl Asleep, released last December. With my trusty laptop in hand I reclined in comfort and relaxed to a coming-of-age tale centered on young girl named Greta who is reluctant to let go of her childhood as she nears her 15th birthday. Entering the world of adolescence is a journey often met with an excess of encouragement from family members marred by judgment and cruelty from peers and contemporaries. Girl Asleep is a film which wonderfully captures these sentiments from the exaggerated perspective of its female protagonist. Strong symbolism in the form of everyday objects and occurrences combined with vivid imagery and exceptional framing help convey the anxiety, fear and apprehension synonymous with growing up. Bethany Whitmore is terrific as the socially stunted Greta, embodying teenage awkwardness on a relatable level for audiences. Her fragile demeanor is humorously off-set by Harrison Feldman as her self-proclaimed and optimistic best friend Elliot.

My viewing of Girl Asleep on the streaming based platform went off without a hitch and not only do I recommend this little gem to Aussie and international film fans alike, but also Umbrella’s exciting new endeavor, which is reasonable priced, reliable and convenient.