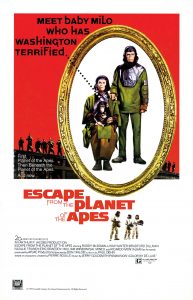 Minutes into the new millennium I prepared to press play on Escape from the Planet of the Apes, after having just enjoyed the previous instalment. However, my planned double-feature was suddenly interrupted as my mother entered the room, telling me that I needed to go outside and “be social.” So after around 45 minutes of standing around awkwardly in my parent’s garage, I was allowed to return to the Planet of the Apes.

Arriving from earth’s distant future, three talking chimpanzees are placed under observation in the Los Angeles Zoo. After one is unexpectedly killed the two remaining apes, Zira and Cornelius, become somewhat of celebrities among society until the details surrounding their origins mark them as a threat to the human race. While still technically on the “Planet of the Apes”, the real world setting of present day L.A. adds a new dynamic to the ongoing saga. It’s a joyous experience watching our two simian leads navigate an “advanced” civilization, almost intergrading to an extent. Interactions with their human entourage allows the audience to connect with the characters of both species as various social issues are cleverly touched upon, such as animal experimentation, nuclear war and government control. Due to the story’s continuation in a bygone time period, Escape from the Planet of the Apes explores the moral and ethical dilemma of changing history after one learns of detrimental future events. The instigator of this particular plot point is my favourite antagonist in the series, Dr. Otto Hasslein, Science Advisor to the United States President. Arguably a straight out villain in the eyes of many fans, I can understand his logic and reasoning behind the action he chooses takes. Portrayed brilliantly by German born actor Eric Braeden, his presence gives the film a sinister edge that only grows more prominent throughout. Performances from Kim Hunter and Roddy McDowall, reprising their beloved role as Zira and Cornelius convey a lot of emotion despite the limitations of the exception make-up effects. Bradford Dillman and Natalie Trundy as their human counterparts, doctors Dixon and Branton represent the compassionate side to humanity, in addition to a kindly circus owner named Armando played by the vibrant Ricardo Montalban.

After numerous viewings Escape from the Planet of the Apes stands firm as my favourite sequel in the original series. It looks at both sides of the coin, asking audiences the rather grim question of whether or not we’re worthy of our dominance over this planet.