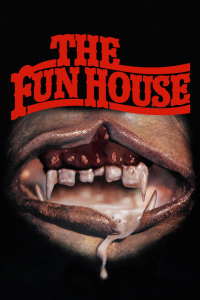 Being partially unfamiliar with a noted director’s filmography can be adventitious for prospective viewers. Following the unexpected passing of Tobe Hooper last year, discussion of his twisted horror/slasher The Funhouse, a title I had never heard of, spiked significantly online among fans, and has since found its way Down Under via a modest Blu-ray release from dedicated label Cinema Cult. Typical of the popular genre, things begin fairly innocently as we follow four teenagers enjoying the night at a small-town carnival. However, when they decide to spend the night inside a hokey funhouse, they’re preyed upon by a horribly deformed man disguised in a Frankenstein mask.

Without a doubt, The Funhouse would be an absolutely perfect selection for late October. Its festival charm spliced with monster madness is very appealing; invoking a feeling of nostalgia for the times I would ride the ghost train as a child at local carnivals. An array of disturbing side-shows attractions serve as a grim appetiser while foreshadowing what’s in store for them later on, and while events may seem predictable to regular viewers of these kinds of movies, there’s a disorienting feeling that comes from a slew of mechanical creations that sucks you in, not to mention the labyrinth-like structure of the titular funhouse itself. Elizabeth Berridge as the film’s innocent heroine, Amy, a wholesome young woman thrust from the carefree nature of youth into a nightmare of which there is seemingly no escape and relentlessly persuaded by a disfigured creature brought to life by the grotesque artistry of the legendary Rick Baker.

If you’re revisiting Tobe Hooper’s contributions to horror or are just wanting to watch something that encompassed what we love about the genre, then I highly recommend The Funhouse, which looks fantastic in high definition but don’t just throw it on. Save it for a late Saturday night, because it’s all about the atmosphere.