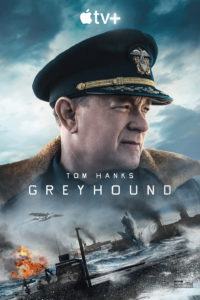 Torpedoed by COVID-19, the action-drama, Greyhound, was diverted from cinema screens to the streaming service of AppleTV, much to the disappointment of its star and producer Tom Hanks. Set in 1942, months after the Unites States had officially entered the second World War, U.S. Navy commander Captain Ernest Krause must lead an Allied convoy across the Atlantic to Liverpool. In addition to Krause’s inexperience, he must deal with the constant threat of attack from German submarine groups, more ominously referred to as a “Wolfpack”.

Coming in at just 91 minutes, Greyhound wastes no time in getting into the action, giving viewers exactly what they should expect from the literally A-B premise. Hanks is very diligent as Krause, conveying the enormous amount of pressure and responsibility placed on his shoulders while presenting what feels like a very authentic depiction of the procedures and mechanics of Naval command. Hitler’s Kriegsmarine was no match for its Allied counterparts, especially the dominate British Royal Navy. However, the Third Reich’s U-Boats were second to none, which enabled them to wreak havoc on supply convoys, amounting to devastating losses. These almost silent killers beneath the waves serve as a genuinely frighting antagonistic force, even taunting our heroes above via some brief and horrifying radio transmissions. Action sequences come in spectacular bursts, each following a nail-biting build-up throughout the cat and mouse narrative. While there’s a prominent digital element regarding special effect and the overall visual aesthetic, the films look and sounds fantastic with the harsh wintery climate restricting visibility as it would in real life. Despite the short runtime, I was left with a feeling of having endured alongside the crew onboard the Fletcher-class Destroyer. Krause is never allowed a moments rest, even though food and coffee are always at the ready thanks to some very patient personnel from the ship’s galley. If I were in his position, I’d probably be barking incoherent orders with a strip of bacon dangling from the corner of my mouth while caffeine fuels my anxiety.

Greyhound isn’t bogged down by explorations of morality or social politics, although hints of theme are there. The film simply delivers on what the trailer promises. Although, I would be remiss if I didn’t mention the appearance of Elizabeth Shue as Krause’ fiancée in the film’s opening scene; which feels like the filmmakers were just ticking a box as it has little bearing on what follows.