If you ever listened to True Cult on ABC Radio here in Australia, you’ll know that host Alex Boniwell is very passionate about genre cinema; so while regular presenter Rhianna Patrick takes a well-deserved break until November, www.cinematicrandomness.com is proud to be serving as a temporary platform for Alex to keep waving the flag for these lesser-known gems and for the physical media market. We hope you enjoy his reviews of a few recent releases on Blu-ray and DVD …and there’s more on the way!

Available on Blu-ray from Shock Entertainment 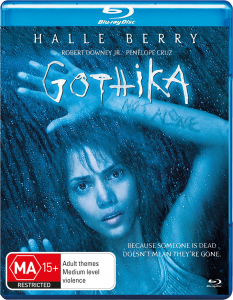 Released in 2003 and with the star power of Hale Berry at the helm this big-budget psychological thriller/horror met with some pretty dreadful reviews and has been found languishing in the basement of “I’m not mad, there is something going on” horror flicks. So, seventeen years after it’s initial run how does it hold up and is it really that bad? Short answer no, it’s not that bad, it is a pretty decent “I’m not mad, there is something going on” horror flick, it was also the Hollywood debut for French director Mathieu Kassovitz (who made the intensely brilliant La Haine (i995) with helped launch the career of Vincent Cassel). When a non-American director hitting their stride makes their first US movie things can go a bit pear-shaped for them, the studios love what they have done in their own country but……..this is America and the audiences don’t like that European or Asian, or wherever style, but we trust you (we don’t) to make the film you (we) want you to make…and you get a somewhat confused style of film making. There are flashes of brilliance in Gothica, some of the camera work is innovative, intense and disorienting, Halle Berry does a good job as the successful prison psychiatrist Dr Miranda Grey who suddenly finds herself under observation in one of the prisons cells accused of a hideous crime with no idea as to how she got there. As Dr Grey’s story unfolds we start to go into some grim territory as the story twists and turns until the good Dr. discovers the truth. We also have Robert Downet Jr. as Dr Grey’s sleazy co-worker, always flirting with her and being just the wrong side of friendly (he has some of the creepiest moments just by being the sleazy co-worker). Part psychological thriller, part ghost story, part horror – Gothica has more going for it than the average fright flick and does indeed warrant a re-discovery. 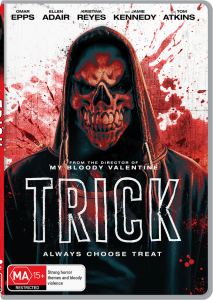 It takes a brave filmmaker to make a film set on October 31st about a masked killer and not think it will be in some way compared to John Carpenter’s seminal Halloween. Although I’m sure director Patrick Lussier (responsible for the My Bloody Valentine remake and the insane Drive Angry) would have known that Trick would be seen, on the surface, as a Halloween knock off. It kind of is but it does it very well.

At a Halloween party Patrick “Trick” Weaver is sitting quietly as his high school friends enjoy themselves until he decides to massacre them. He then disappears but returns every Halloween night to kill and kill again. Frazzled police detective Mike Denver (Omar Epps) tries each year to catch the elusive Trick and each year fails. Maybe this year he will get his psycho killer.

There is some good gore, some great twists (with nods to both Saw and Scream in places) and is a decent enough slasher and has a cool 1980s VHS rental vibe about it. Of course the teens, the police and Trick do dumb things throughout the film, but that’s half the appeal, rolling your eyes and shouting at the screen – “Noooo, don’t do that/go in there/cut that rope!” etc (but really we don’t want the characters to do everything right, that never works either, just look at what happened in The Hitcher (1986), C. Thomas Howell as pursued teen Jim, does everything he is supposed to do to get away or report Rutger Hauer’s killer John Ryder but still ends up worse for wear.) Anyway, Trick is a pretty good if not original take on the slasher horror film.

Available on DVD from Madman Entertainment 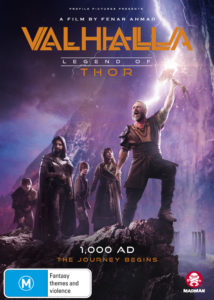 With the Marvel movies still making a mint, it’s no surprise that a Thor movie would come out of Norway and is based on the original Nordic Sagas. Thor (Roland Møller – who you might have seen in the immensely silly but enjoyable Skyscraper and Atomic Blonde) and his half brother Loki (played with villainous glee by Dulfi Al-Jabouri) travel to Midgard where they impose themselves on a peasant family (as Gods do) and demand settler and food – you can apparently slaughter Thor’s magical giant goats that pull his chariot – but don’t break their bones when making the stew, that’s a no-no, but Loki persuades the son Tjalfe (Saxo Moltke-Leth) to do so as he knows this will lead him to be taken back with them as a slave, but Tjalfe’s sister Røskva (Cecilia Loffredo) won’t let her brother leave alone and hides aboard the chariot and they journey together to Vahalla where it is revealed that all is not well as the giant wolf Fenrir has escaped and the God’s swore enemies, the Jontar are both threatening to destroy Valhalla and bring on Ragnorok. All the gods are here – Odin, Frigg, Freya, Tyr etc, but they are less than glossy as they spend most of the time lazing about getting drunk and living on past glories, it’s not until the children escape their gilded cage and show how the Gods need the mortals as much as the mortals need the Gods that Thor and his brethren are stirred into sorting things out once and for all. This is a decent adventure film, it has high fantasy, heroes in the making and redemption for the lost, cool bad guys and, of course, a giant wolf. A little clunky in places but a great introduction into the Viking Sagas, I need to find some more movies now.