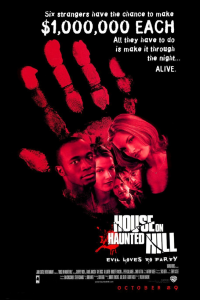 Barely two months into the new millennium and its novelty had all but worn off. Y2K didn’t wipe us off the digital grid and with the school holidays already behind me, a feeling of routine had resumed among myself and respective peers. Friday night often involved a visit to the local cinema and with nothing particular in mind, my friend Stephen and I set our sights on the only horror movie playing, House on Haunted Hill, the debut feature from the newly formed production company Dark Castle Entertainment. Founded by Robert Zemeckis, Joel Silver and Jared Bush, this house of horror was a homage to prolific filmmaker William Castle; with the goal to remake his most popular films over subsequent years.

As an elaborate birthday party for his spoilt wife, an amusement park mogul invites a group of diverse strangers to spend the night inside a haunted house with a horrific past. If they survive they’ll each receive $1,000,000 dollars, tax free! What I admire about House on Haunted Hill above all else is how it manages to be respectful towards the 1959 original while catering to modern horror fans by way of flashy special effects, up-to-date parallels of past characters and visually striking set design with a maze of abandoned rooms, embodying a subterranean hell-like presence. Geoffrey Rush relishes every moment as gracious host Stephen Price, enthusiastically mirroring the iconic role first performed by Vincent Price in Castle’s black and white classic. His wife Evelyn is played effortlessly by Dutch-born-actress Famke Janssen, who embodies a harshly unpleasant demeanour while exuding a distracting level of sex appeal. Our party goers on the other hand aren’t as memorable, although one certainly made an impression on my 15-year-old self, namely Ali Larter as Sara Wolfe, a desperate out-of-work assistance, who I couldn’t help crush over during a period of my adolescence. Each represent a specific archetypes and while not all of them stick around, their contributions and in some cases gruesome demise, add to the horror and the film’s overall creative prowess. Former SNL player Chris Kattan deserves an MVP for his performance as the high-strung and equally sarcastic Watson Pritchett, the house’s reluctant owner, who knows all its dark secrets. Simply put, he’s funny without being funny, a fine line that the comedy actor balances with ease. 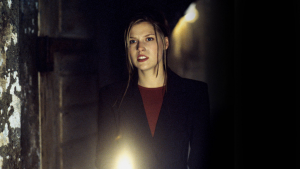 House on Haunted Hill is easily one of horror’s better modern remakes. It’s not a flawless effort, but it’s faithful to what came before and to the genre as a whole, providing a rich and genuinely scary atmosphere with a traditional feel. Seeing it on the big screen 17 years ago remains as a favourite cinema experience and subsequent viewings often serves as a bittersweet reminder of my youth and those who I shared it with. Sure is a funky old house, ain’t it?