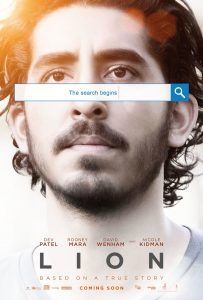 We’ve all had those moments as children when we momentarily lose sight of our parents or older sibling while out among the busy streets and shops. It doesn’t take long for panic to seep its way into our fragile minds, but no sooner as the thoughts of being lost forever occurs, we’re being scolded for wandering off. However, for one five-year-old Indian boy named Saroo, it would be a life-long reality after becoming lost on the street of Calcutta thousands of kilometres from home, to eventually being adopted by a couple in Australia. Twenty-five years later, thanks a new online search tool, Saroo sets out to find his lost family.

Despite being a harrowing drama and an extremely well-made film, there’s an unrelenting sadness that only begins to subside during the second half where we meet an adult Saroo set to embark on university studies in Melbourne. While it’s made clear that his upbringing in Australia was one of love and encouragement, the anguish and memory of his past is still present. An uncompromising look at the over-populated urban slum of Calcutta from a child’s perspective carries the fear and disorientation over to the audience, juxtaposed with the more subdued feeling of everyday life in Australia. This impactful cross-section of human existence is matched only by the performances, primarily from Dev Patel as Saroo Brierley and Nicole Kidman as his adoptive mother Sue. Both of who embody a sense of courage that defines all logic and love.

Home may not be paradise, but it’s home nonetheless and something we should never take for granted, which is the message Lion both successfully and beautifully conveys. Based on the remarkable true story and nominated for Best Picture at this year’s Oscars, I encourage you to see it during its run in cinemas.