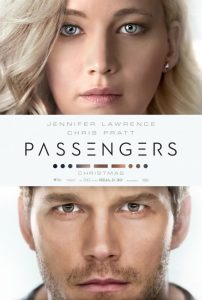 Going to see Passengers wasn’t really on the agenda, but after a day of post-New Year shopping, which mainly involved hunting for Rogue One trading cards, it seemed like a good idea to fill the time before dinner at TGIF (on Wednesday). Starring two of the biggest movie stars on the planet, Passengers tells of a mechanic named Jim (Chris Pratt) aboard a spacecraft transporting thousands of people to a distant colony planet, who is awakened from his sleep chamber 90 years before arrival. After some time of enjoying the spoils of being the soul conscious occupant on board the rather luxurious vessel, he is faced with the unusual moral dilemma of waking a female passenger (Jennifer Lawrence) for the sake of his sanity.

There’s a been a lot of criticism level towards Passengers for being sexist. Not only don’t I agree with said criticism, but I wonder how many of those making these accusations actually bothered to watch the film, because I think the it’s very clear and understandable why certain choices were made by the male protagonist. Maybe if people made more of an effort to try and emphasize with the character or picture themselves in that situation, the reaction might had been less vocal. Personally I enjoyed the movie simply for what it was, a visually stunning adventure which embodies many of the fundamentals of science-fiction cinema. Production design with all its detail, sophistication and aesthetic culminate to the ultimate in escapism for the audiences. Chris Pratt and Jennifer Lawrence have a poignant chemistry, with Pratt really excelling as a leading man. Also, well worth mentioning is Michael Sheen robotic bartender Arthur who provides some nice levity.

Passengers was the perfect filler for an afternoon in the suburbs. I came out feeling good and with no real complaints, ready to enjoy the rest of my day.