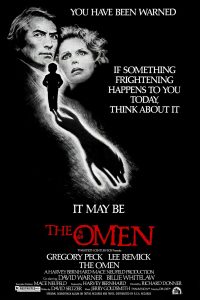 At what point does a particular film become a personal all-time favourite? I guess it depends a lot on the individual, but in the case of myself and The Omen, it was the moment when my perception of the horror changed forever. I learned that ambiguity and implied terror carried more impact than the most frightening monsters and boogeymen. Conceived as a reflection of the satanic craze that was sweeping across American during the 1970s, The Omen follows an American ambassador and his wife who find themselves surrounded by mysterious deaths of an ominous nature, seemingly connected to their young child, Damien.

Few horror films have managed to tap into our psyche and subconscious fears much like The Omen; which has become a staple within the popular genre, mostly for its portrayal of a supposedly evil child as an eventual instrument of merciless power and domination over God’s dominion. However, is this landmark feature something far less sinister as the story subtly implies? Known predominantly for his work as a TV director, Richard Donner focuses on the film’s aforementioned interpretive nature, derived from David Seltzer’s screenplay. Despite the horror piece’s one-sided marketing as a straight-forward demonic flick, viewers along with their protagonist’s spend its length trying to uncover its possible supernatural undertones; will they reveal a foretold prophecy or fall victim to bizarre coincidence, personal anguish or religious paranoia? The reality of a modern world marred by the idea of a diabolic plot poised to threaten humanity is what I personally find to be most terrifying. Gregory Peck in the starring role as Ambassador Robert Thorn along with his wife, Katherine, played by Lee Remick, both bring a level of sophistication which elevate the film above the conventional genre norms. Peck delivers an emotionally tormented performance, which carries a poignant quality knowing that it was a difficult time personally for the renowned actor as his son Jonathan has tragically committed suicide the year prior to the film’s release.

Today marks forty years since The Omen was released in cinemas across the United States, which as the main source of motivation behind me writing this review. I hope you forgive my vagueness despite the film’s age, but at the chance that someone out there is ready this and decides to watch the film, I would hate to have hindered the level of impact it had on me as a teenager.