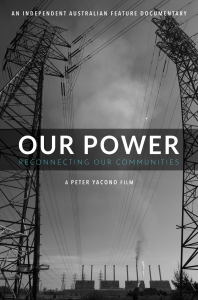 A three-years-in-the-making and passion project for Melbourne-based director Peter Yacono and producer Anissha Vijayan, Our Power is a documentary feature exploring the impact of the Hazelwood Mine Fire, which occurred in the Latrobe Valley during February and March of 2014. The feature also strives to present the region’s history of power generation, spanning close to a century.

I attended last night’s premiere, one of the FREE public screenings held over this weekend in Traralgon, Morwell, and Moe where the comforting and unmistakable smell of popcorn greeted locals inside the Lavalla College auditorium. Crowd funded and fully independent, Our Power provides a well-structured narrative about a community not only recovering from a recent industrial disaster, but one that has sadly been neglected and unable to bounce back from the privatisation of Victoria’s power generators over twenty years ago. Having lived in the Latrobe Valley, specifically Morwell, all my life, watching the 55-minute feature felt quite surreal at times. Stories of hardship and despair from members of the community, not to mention the blatant corporate negligence, gives audiences the scope and scale of what was ultimately a perfect storm of poor decision making and mismanagement of an important part of societal infrastructure. While the flow-on effects could have easily been explored further, I appreciated that ample time during the documentary that was given to relay a message of optimism for a prosperous future under renewable energy sources and schemes, that everyone can potentially embrace; the level of balance is commendable.

I’ve seen a lot of documentaries as you can imagine, they’re among one of my favourite genres, and the production quality of Our Power is exceptionally high, with stunning photography of lush landscapes and towering industrial assets that instantly quell any disparaging thoughts one might have. I’d like to thank Peter and Anissha on an excellent film, which I hope gives the proud residents of the Latrobe and greater Gippsland a louder voice.

More information on Our Power can be found by visiting ourpowerdoco.com; the final screening is tomorrow (June 3rd) inside the Moe RSL Sub Branch at 2pm, on 63-68 Albert Street, Moe.