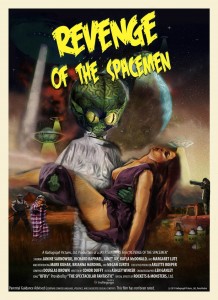 Not all of us have the resources to create the next cinematic masterpiece, just a simple vision and the passion to express what we love; which is exactly what director Jay Summers and a band of enthusiastic Ohio locals brought to Revenge of the Spacemen. Serving as a fun and very loose throwback to the retro glory of the B movies that played on Drive-In screen across the world during the 50s and 60s, this sci-fi misadventure centers on a rural Mid-western American town during a sudden alien invasion. From the onset resistance from the  often-described “little green men” appears futile until resident rednecks and party-going youth take up arms in the fright to save the earth from the probing hands of their unwelcome visitors.

Revenge of the Spacemen was edited in Traralgon during the Hazelwood Mine Fire by Ashley Wincer, who co-hosts the Morwell-based radio program, The Sound Of Moves on Gippsland FM. Ashley became involved with the project while working with the film’s director at a U.S. airline, which has since gone out of business. While it a was stressful time for all those affect by the fire, Ashley’s efforts should be commended considering the limited time frame to edit the feature in time for it’s submission into a number of film festivals. I had a chance to chat with Jay Summers about his debut feature and while he sighted a general love of B movies as the main source of inspiration, he pointed out the conscious decision to make a fun movie; in which mistakes and error were acceptable due to the limited budget and the relatively inexperienced talent. This candid approach makes it hard not to enjoy this sci-fi/comedy and as a fan of the genre myself, I found the overall experience entertaining; getting a kick out of the various references and little nods to a number of classic titles.

For more about Revenge of the Spacemen and how you can watch it, visit revengeofthespacemen.com