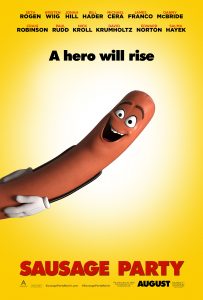 I honestly never intended on seeing Sausage Party, but due to the unfortunate limited release of the new Australian dark comedy Down Under, I had to compromise. Thankfully the night was far from lost as I was able to enjoy the atmosphere of a packed cinema filled with constant laugher mixed with the occasional sounds of sheer disgust. Adult animation very rarely frequents our cinema screens unlike the family oriented variety, but when it does you know right away that you’re in for something outside the norm. Determined to learn the truth about his existence, a sausage named Frank searches for answers within the confines of a large supermarket where he and his consumable counterparts are oblivious to their intended purpose.

Subtle as a train wreck, the onslaught of humour in this 90-minute feature is so blatantly filthy that it makes the rawest of HBO stand-up specials look tame in comparison. There is no filter or regard for anyone who might choose to watch this film, it’s complete comic freedom so consider yourself warned if you haven’t seen it already. I for one was thoroughly amused and entertained and throughout the picture’s entirety and quite impressed by the underlying concept of social politics represented hilariously by various food groups and products (in stereotypical fashion I might add). An array of comedy Heavyweights and acclaimed actors lend their vocal talents to our cast of edible characters with Seth Rogen as Frank and Kristen Wiig as hotdog bun Brenda clearly having a lot of fun voicing the two leads; but for me personally it was Edward Norton doing his best Woody Allen impression as a bagel named Sammy.

In the Pixar tradition of storytelling, Sausage Party asks the question of ‘what if food had emotions… and filthy minds?’ so it would seem. It contains many of the classic animation tropes, but it’s definitely not for the kids so be sure to call a babysitter.