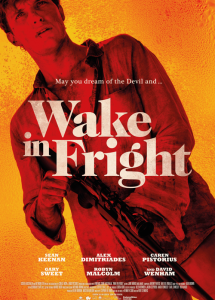 With its social themes more relevant than ever, there was really no need for a new screen adaptation of Kenneth Cook’s Wake in Fright, but Channel Ten knows a cash cow when they see one so despite all us fans of the original trying to pretend this wasn’t happening, a two-part min-series aired between October 8th and 15th, in which we follow Outback school teacher John Grant (Sean Keenan) who finds himself marooned in an isolated mining town where temptation and misfortune take him to a very dark place.

There’s not an ounce of subtly to speak of throughout this modern interpretation. Instead of the aggressive hospitality that was so prominent and unsettling in Ted Kotcheff’s 1971 masterpiece, we get something that’s so overtly ominous and nasty that it has no real impact, which was frankly quite aggravating. I quote film and television critic Andrew Mercado, “…there are more sideway glances and leers in this one than beers!” Our protagonist is unsympathetic and unrealistically foolish as he finds himself caught up in the town’s criminal underbelly, comprising of cartoonish villains, veering even further from the source material, resulting in a generic feel.  If there’s any saving grace, performances from both Alex Dimitriades as disgraced doctor Doc Tydon and David Wenham as the intimidating Sergeant Jock Crawford are exception and despite differing from their original counterparts there a significant presence.

I feel Wake in Fright was either made for a lesser audience or those begin the scenes completely missed the point of Cook’s novel. Underlying themes of alcoholism, loss and primeval nature of man’s desires are barely touched up, leaving viewing wonder what was the point?