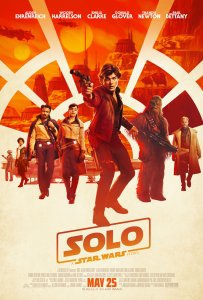 With small pipes for drinking straws, three soft-core Star Wars fans of sound mind hauled several liters of soft drink into a Friday night showing of Solo: A Star Wars Story with little to no expectations. Built from a casual boast of skilled flying and something about a Kessler run, this second anthology instalment traces the early days of renowned scoundrel Han Solo during a daring adventure into the criminal underworld, making familiar acquaintances along the way.

From the establishing shots of industrial planet Corellia, where Imperial Star Destroyers are pieced together in epic fashion, I was on board! Solo: A Star Wars Story is a fun action-filled spectacle, that director Ron Howard has presented in a classical style of big screen storytelling; with an impressive variety of locations illustrating the film’s dedication to world building, much to the service of fans. From the hell of trench warfare to a mountain top train robbery, we move at breakneck speed before we enter a lawless society that has always taken backseat in previous installments. Despite baring little resemblance to Harrison Ford, rising star Alden Ehrenreich is easy to accept in the titular role of the iconic character. He brings a lot of energy and certainly isn’t short on charisma, while Donald Glover is very smooth as notorious gambler and rival Lando Calrissian. Needless to say our favourite wookiee Chewbacca is introduced, and in a more beastly fashion than I expected, but the rapport he and Solo quickly establish brings a comforting feelings of nostalgia. Supporting characters are significant in shaping the man Solo will eventually become, such as first love Qi’ra, played elegantly by Emila Clarke and the always terrific Woody Harrelson as seasoned smuggler Beckett. Also, I must give props to Paul Bettany as the villainous crime boss Dryden Vos, who’s flashy exteriors combined with a sinister demeanour reminded me of his terrifying performance in Gangster No. 1; an underrated film to say the least.

Solo: A Star Wars Story isn’t a great film; there are a few issues like a pre-occupation with giving an origin to things can easily be deduced or left up to the imagination, and it’s a little too long which I think hinders the pacing. Having said that, my experience was one of pure escapism and a gentle reminder of childhood viewings of the original trilogy. It’s a good old fashion heist movie set in a galaxy far, far away and a welcome break from the metaphorical nature and mythology prominent with ongoing Star Wars saga.