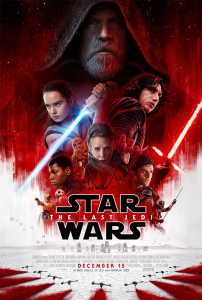 We live in an age when Star Wars comes but once a year, with the latest instalment in Disney’s newest tent-pole franchise opening in theatres across the globe as of yesterday. Star Wars: The Last Jedi continues on from where The Force Awakens left off, with the First Order and the Resistant exchanging blows while Jedi hopeful Rey seeks help and guidance from a reluctant Luke Skywalker.

Overall I enjoyed the film, even more than its predecessor and I can honestly see myself watching it again upon the Blu-ray release. However, my experience was marred with moments of frustration and displeasure. Much like The Force Awakens there’s an inconsistency of quality that’s hard to get past. An opening space battle full of visual spectacle and call-backs to classic WWII pictures was not only exciting to watch, but really built up momentum, which unfortunately diminished with two supporting character whisking off on a questionable side mission to a planet that looked like it was modelled from the roaring ‘20s of New York City, a far cry for the Star Wars universe.  For every great moment there seemed to be something to counteract its effect, where it be droll dialogue or small occurrences that felt out of place. On a more positive note, the mythology and lore surrounding the force is maintained while delving a little deeper into its greater meaning, sentiments that Luke personifies with his wisdom and accumulative knowledge. More than ever our titular protagonist reminds me of the types of heroes we find in classic westerns, those often seen portrayed by the likes of Clint Eastwood. Solitary individuals who understand that where there is good, there is also evil and by how accepting the two is what truly makes us whole. Mark Hamill excels in his performance as the aging Jedi master and despite limited acts his subplot is somewhat befitting to his legend, which will leave many fans satisfied at best.

Star Wars: The Last Jedi is proof of a franchise that’s quickly evolving. I don’t entirely agree with the direction this series is heading and while it’s easy to blame corporate Disney for all the shortcoming, especially when it comes to cute and cuddly creatures, there’s an agenda that translates on screen more noticeable than other major studios. Having said that, seeing Star Wars in a packed cinema surrounded by fandom and enthusiasm is an experience in itself and a positive one regardless, so don’t pass up the opportunity.