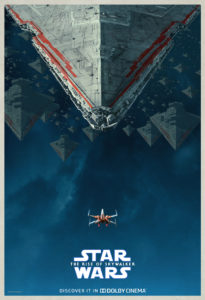 When The Force Awakens hit theatres four years ago, the beginning of Disney’s anticipated sequel trilogy, there was so much buzz and unbridled optimism among fans. Now that we’re at the end, the mood has changed significantly as those years between gave use the best and worst of fan/internet culture. Need I say more? However, excitement was still at fever pitch for the final chapter in the ‘Skywalker’ saga, The Rise of Skywalker, which has the fractured remains of the Resistance facing the First Order once again amidst a new powerful threat, while Jedi hopeful, Rey, searches for her true identity.

The Rise of Skywalker is rather dismissive of the previous instalment, The Last Jedi, which was subject to some very harsh, and what ultimately proved to be, course altering criticisms. Unfortunately, this approach undercuts parts of the story and keeps this final chapter feeling more like a standalone adventure as opposed to a third act in this grand story of light versus dark. I will say though, that visually the film soars to new heights, providing an almost operatic display of cosmic wonderment and awe-inspiring images, many of which are nice call-backs to Lucas’s original trilogy; bolstered by mostly digital special effects with a prominent practical element, marrying the two almost seamlessly. In regards to pacing, the film doesn’t hesitate jumping feet first into the action from its opening, leaving little room for viewers to become reacquainted with our protagonists. Things get scrappy with our heroes and villains as they fight their way through separate journeys, before putting on the breaks for a sizeable interlude to provide an abundance of exposition whilst planet-hopping. Performances from the diverse cast are very strong, despite the characters being mostly uninteresting, but John Boyega and Oscar Isaac both hit their stride as Finn and Poe, who I feel are the most developed. Rey is more or less the same, but it’s not a reflection on actress Daisy Ridley who gives a tremendous performance in every respect. I’ve just struggled to connect with her as the film’s main hero. Our villainous First Order, with the exception of Kylo Ren, are basically pantomime antagonists, even Palpatine to a point, who’s return probably should have come in the previous film.

I quote Chernobyl’s Comrade Dyatlov when I say The Rise of Skywalker is “Not great, not terrible.”, but overall I did enjoy the experience which gave me goosebumps on a few occasions, especially during the film’s climactic battle, that’s worth the price of admission alone. It’s obvious now that Disney had no solid plan going in, other than to sell toys, a bubble that’s about to burst if it hasn’t already.