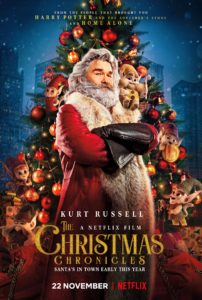 Watching films ironically has long been a popular pastime, especially among pop culture aficionados, one that’s grown in popularity with the rise of podcasts and social media. Netflix seems to have taken note in recent years, particularly via their stable of Christmas features, most of which clearly make no apologies of what they’re aiming for. However, this year’s streaming sensation The Christmas Chronicles finds a comfortable medium where it’s able to provide a legitimately good holiday movie for children while teetering on the edge of self-awareness with the occasion nudge and wink to wiser viewers.

Brother and sister Kate and Teddy Pierce plan to catch Santa on camera one Christmas Eve, but find themselves whisked off for the ultimate all-nighter with Ol’ Saint Nick, who sets out to put the siblings on the straight and narrow following the death of their father. Yes, this movie starts on a very sombre note. The Christmas Chronicles certainly knows its respective audience, utilising common tropes from a more cherished era of Christmas movies and generally maintains a fairly upbeat tone. For example, our youngest protagonist Kate, played by Darby Camp, is seen rocking a mid-2000s camcorder as opposed to the latest smartphone, an out-of-date practice, but serves an affectional nod to a simpler time. Kurt Russell, undeniably the film’s biggest drawcard, is effortless in playing himself, playing Santa, who’s method of travelling the globe in one night has a clever astroscience basis, which almost seems plausible.

While a little patching in places, namely due to some uninspired elves and one hilariously cringe-worthy jailhouse rock with Little Steven Van Zandt, I think The Christmas Chronicles might just be Netflix’s answer to The Santa Clause. It’s wholesome and a lot of fun.