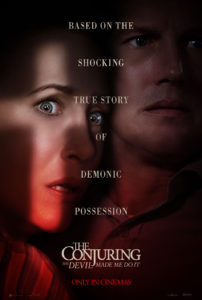 Not since the Universal Monsters has there been a horror-movie shared universe as prominent as The Conjuring series, whereas others are subtle regarding their connective tissue, like the ‘Poho County-verse’ created by problematic director, Victor Salva.

After five years and four spin-off features, the long-await reunion with the franchise’s central figures, Ed and Lorraine Warren, has arrived with The Conjuring: The Devil Made Me Do It. This time-around event are based on the 1981 case of Arne Cheyenne Johnson, who claimed demonic possession as the reason for killing his landlord. While awaiting trial, the Warrens investigate the aforementioned murder and its link to the unholy.

With some expected call-backs to The Exorcist, like a replicating shot and Ed’s weak heart, this third outing is, to put it simply, average; a film that peaks during the opening scene in terms of scare-factor. Much like The Conjuring 2 and the very dubious case it exploited (The Enfield Poltergeist), the film again leans heavily on the ”true story” aspect while fabricating an additional narrative as our supposed victim is behind bars. Unfortunately, it’s not the most creative and rather predictable, hitting many of the usual beats. However, the film has a lot of production value and achieves what feels like a very authentic early 80s setting that comes with a light ‘car radio’ soundtrack. Patrick Wilson and Vera Farmiga as the compassionate Ed and Lorraine still have that comfortable bond that’s made the duo so appealing to audiences. While their real-life counterparts are often scrutinized, it’s easy to see why the Catholic crusaders are so marketable.

I’m more for a grounded form of horror, which is why I enjoyed the 2013 original so much, due ito its confined setting and a minimal ‘less is more’ approach. The Devil Made Me Do It is an example of a noisier and hectic style that’s common among mainstream titles, and while it often tapers off in favour for some clever visuals, the film does get carried away with throwing scares on the screen.

THE CONJURING: THE DEVIL MADE ME DO IT
(2021, director: Michael Chaves) 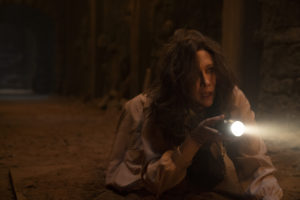 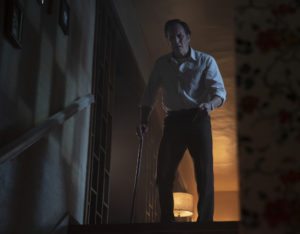