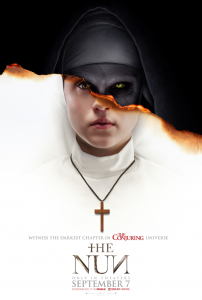 It quickly became obvious that the malevolent force in The Conjuring 2, which explored the dubious Enfield Poltergeist case, would go on to have its own spin-off feature. Mock-up posters created by eager fans soon appeared online and within just over two years, The Nun was summoned, opening in theatres earlier this month. Set in 1952, an experienced priest and a novice sister soon to take her final vows, are sent to a decrepit monastery in rural Romania to investigate the mysterious death of a young nun and to confront an evil stalking the many dark corridors.

Once I managed block out the noise of a cinema patron fishing through what sounded like her entire pantry, I could finally sink my teeth into the ominous European setting, which to the film’s credit provides some genuine atmosphere. However, despite the solid foundation The Nun lays down during its jarring opening scene, the film fails to launch, caught in holding pattern of jump scares and apparitions, seemingly one after the other. Unfortunately, the film never at any point applies the breaks to build upon the story, which feels like a really missed opportunity. I think there was real potential to create something quite terrifying and unsettlingly from a demonic nun, an ugly sight against what is holy and good. Many of the visual tricks throughout the film, featured heavily in the numerous trailers, suffer from an over-reliance of digital effects, which could have otherwise been achieved with practical means. I found this particular element diminished the impressive interior sets of the monastery, shot beautifully under candle light, to capture the distinctive architecture.

I wanted to like The Nun, because on paper it sounds like one blast of a horror movie, but sadly it’s a by-the-numbers Hollywood spook-fest, opting for cheap thrills like a small-town carnival ghost-train. On the plus side, Taissa Farmiga is decent as bride of Christ Sister Irene and writers Gary Dauberman and James wan tie the film well into The Conjuring universe.