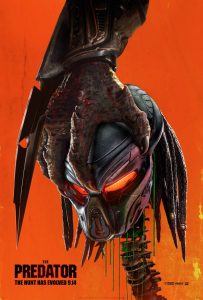 Much like The Meg which surfaced in cinemas last month, The Predator crash lands following an equally fun advertising campaign, creating nostalgia among fans via a string of savagely retro-style posters, echoing the franchise’s 80s roots. Directed and co-written by Shane Black, this third official sequel follows the familiar premise of a Predator wreaking havoc on earth, with a more elaborate plot later coming into play. With the human race at risk, a decorated sniper, one fed up biologist, and a rag-tag bunch of mentally ill servicemen set out to stop the alien game-hunter.

It’s been less than 24 hours since I saw The Predator and I’m having trouble remembering details of the plot, which I suppose is a statement right here. However, I consider this a minor detail as most of the film’s enjoyment springs from a casual self-aware attitude and tongue-in-cheek humour from most of the characters. I could not believe me ears when a Whoopi Goldberg joke was made. Brutality is relentless with the Predator exercising his skills whist utilising an impressive kit of slice and dice weaponry, giving the action romp an especially violent edge in a similar vein to Predator 2. With the exception of Thomas Jane and Keegan-Michael Key, the cast isn’t overly impressive, although performances are generally strong across the board. Boyd Holbrook as main protagonist Quinn McKenna proves capable as a leading man, while Olivia Munn clearly relishes in the scripts lighter side as biologist Casey Bracket.

Despite moments of some surprisingly poor digital effects and plots elements that would make Nazi scientists green with envy, The Predator is neither terrible nor great, just a comfortable medium, which warrants a fun night out at the movies.