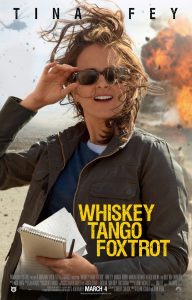 With a trailer highlighting the various comedic talents of funny-woman Tina Fey, and espousing overtly humorous dialog many moviegoers would be excused for writing off Whiskey Tango Foxtrot as a frivolous look at American occupation in the Middle East. Based on the wittily-titled memoir The Taliban Shuffle: Strange Days in Afghanistan and Pakistan by Kim Barker, a dissatisfied television journalist takes an assignment as a war correspondent in Afghanistan during the early years of Operation Enduring Freedom. While our heroine quickly develops a thicker, bolder, and more adventurous skin, her new sense of purpose eventually poses hazardous to the safety of herself and others.

In the face of ever present danger humour is often the perfect means of neutralizing an otherwise tense situation, and is thus a defence often utilized by soldiers, bystanders, and others thrown into a typical situation. Satirizing the various side-effects our middle class protagonist’s suffer from when thrown into such an atmosphere, the film brilliantly reflects on the ambivalent attitudes adopted by journalists and commonly misunderstood by onlookers. Unfortunately for our band of characters their “new normal”, often leads to a false sense of invincibility despite their hostile setting. Initially baffled by the relaxed, party-driven culture embraced by her respective peers, our protagonist soon finds herself succumbing to their unconventional lifestyle. The cultural divide and military vernacular both serve as a consistent sources of humour without treading into offensive territory; appropriately reflecting the film’s title, a clever initialism of WTF. Tina Fey’s portrayal of Kim Baker is an impressive addition to actress’ growing dramatic repertoire, which is often overshadowed by her comedic output. Supporting players fuel the film’s juxtaposing atmosphere, with Margo Robbie as an English correspondent Tanya Vanderpoel, who despite a confused accent embodies the wild nature of her chosen profession. Martin Freeman as Scottish freelance photographer Iain MacKelpie is strangely likable considering an overtly lecherous quality; and in a small but easily the most believable role is Billy Bob Thornton as a Marine Commander General Hollanek, who shares only a few small scenes with Baker, but the mutual respect and initial awkwardness between the two is fun to watch.

Whiskey Tango Foxtrot is what Catch-22 and M.A.S.H. were to 70s cinema; a meaningful by lighter look at the absurdity of war when it was still firmly embedded in the national psyche.