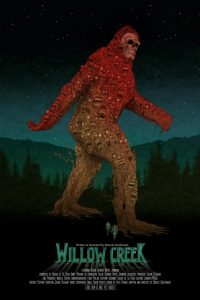 Found-footage films often come with a degree of controversy, especially among horror fans, but I’ve been an advocate for the divisive sub-genre even since I saw The Blair Witch Project in theatres. While I admit to seeing more bad titles than good, I’m a sucker for the feeling of realism they invoke. Thanks to a new genre based podcast (Sci-Fi Double Feature Drive In Podcast) Willow Creek is the latest to tickle my fancy. Directed by Bobcat Goldthwait of Police Academy fame, we follow Jim and his girlfriend Kelly as they head deep into Six Rivers National Forest in Northern California where Jim, who is a Bigfoot believer and enthusiast, hopes to shoot his own footage of the elusive beast at the site where the infamous Patterson–Gimlin film was shot.

Willow Creek is typical of the genre in many respects, almost a clone of its famous counterpart, but despite the familiar territory the film works remarkably well. There’s a subtle self-awareness, which keeps the mood light for a good portion of the film as we the audience are introduced to a community that has embraced the mythology of Bigfoot regardless of one’s beliefs. As ominous signs of something unusual begin to emerge, the wilderness in which our two characters have innocently entered suddenly becomes extremely dark and uncertain. Performances from Bryce Johnson and Alexie Gilmore who portray our traveling couple, Jim and Kelly are convincing and significant to the film’s desired effect as they’re preyed upon by something neither of them were expecting, and tormented by the eeriest of sounds. That old trick of what we don’t see is used to its full potential, partially during one gut-wrenching sequence.

Bigfoot is obviously no stranger to the big screen, but I’m glad Willow Creek was my first cinematic encounter with Cryptozoology’s most famous creature.