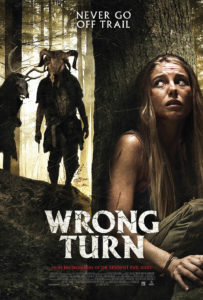 I still remember quite vividly watching the original Wrong Turn in late 2003, while enjoying that aimless gap between finishing high school and getting a job. What I consider a perfect 30/70 blend of Deliverance and The Hills Have Eyes, the off-road horror film spawned five sequels, ending in 2014. Now only seven years later we have a remake, or re-imagining, to be more specific, which like it’s early 2000s predecessor, places a group of young people on the Appalachian Trail. However, a detour in the hopes of seeing a piece of America’s formative past leads our socially diverse hikers into the hazardous territory of a centuries-old community, who are a law onto themselves.

Wrong Turn starts in a fairly cliché manner, with our characters arriving in a small rural Virginia town where they’re met with resentful stares, followed by an ominous warning about ‘them hills’ and of course a slight verbal altercation with some of the rougher locals. It also doesn’t help that our characters are a little on the arrogant side, which didn’t invite much warmth from this viewer, even when their nightmare begins. Although, the pacing does pick up dramatically; spurred on by deadly booby traps that unleash the carnage and the film’s apparent and disturbing fixation with head trauma. Interestingly, Wrong Turn takes a non-formulaic approach by almost hitting the reset button around halfway through as we jump forward several weeks. It’s here where Matthew Modine (the film’s biggest name) as a worried father, Scott, sets off to find his daughter, Jen (Charlotte Vega) one of the six I’ll fated hikers. I feel this justifies the running time and gives a broader view of the villainous community and the disdain they’ve earned from the town below. Departing well from the inbred hillbilly trope, these particular wood dwellers, are led by the imposing authoritarian, John (Bill Sage); from whom we see the extent of their cruelty, which includes a punishment worse than death. He challenges the idea of a perfect society defined by the world he’s abandoned, but the progressive background and socially inclusiveness of the film’s protagonist exposes his hypocrisy and sinister nature. There are some plot holes surrounding the community, known as ‘The Foundation’, like unexplained Scandinavian accents, that’s even a struggle to deduce; and the simple fact that this alternative society has been able to exist for so long in such a connected world. I feel like the attitude of “those we don’t speak of” will only get you so far. 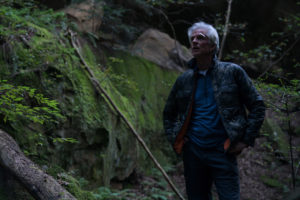 Wrong Turn gets pretty nasty and gruesome and despite outstaying its welcome, just a little bit, it’s a fine modern take on the survival horror genre, which I think most fans will enjoy. There are some strong performances from Charlotte Vega, who really carries the final act, and Bill Sage is very intimidation with his monstrous voice. Matthew Modine is a solid supporting act who seems a little out of place, but maybe that’s the idea. 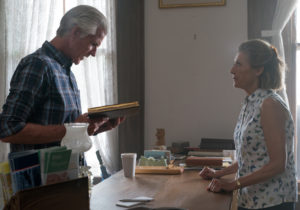 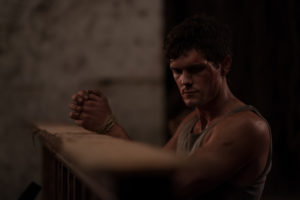 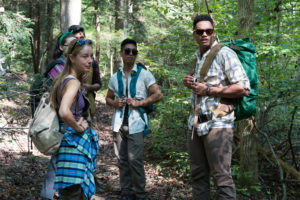 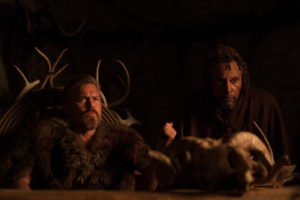