With the festive season upon us, many will be changing their viewing habits to help get into the holiday spirit; but if you’re in need of some cult cinema, Alex Boniwell has three New Release titles on DVD from Aussie distributors, Eagle Entertainment and Umbrella Entertainment to fill the void. 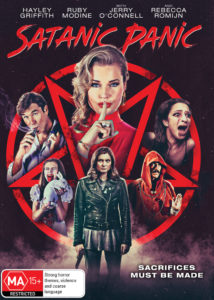 This is straight out of the 1980s/90s straight to video style stable. If this were in my local video shop when I was 16 it would have been rented on the cover and title alone. Directed by the fantastically named Chelsea Stardust this tale of devil worship in the rich part of town is great fun. Hayley Griffith is Sam, a cash strapped pizza delivery girl who gets a job delivering a stark of pizzas to and address in the wealthiest neighbourhood in town. When she isn’t tipped (and out of gas) she sneaks into the house to ask for said tip only to find a Satanic coven in a bit of a ‘tiz’ as their virginal sacrifice is no longer pure. Sam on the other hand is just the innocent they need. Cue a bloody game of cat and mouse as Sam tries to get flee. This is really-good fun; it’s silly, it’s splattery and very funny in places – coven head Danica Ross – played superbly by Rebecca Romijn (Mystique from the X-Men films) has the best lines and is a fantastic leading baddie. So, if you’re a fan of 80s/90s straight to VHS style horror, or indeed films like the two Babysitter movies then Satanic Panic should most definitely be on your list of films to pick up.

Available on DVD from Umbrella Entertainment 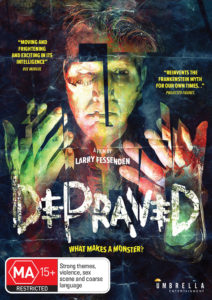 Always interesting to see a new take on the Frankenstein story. The mad scientist reconstructing a new person from bits and pieces of others has been a mainstay of horror films since their inception (the original Frankenstein movie was made in 1931) and since then it has had many incarnations (some of my favourites include Young Frankenstein, Re-Animator, Flesh For Frankenstein and Frankenhooker) but regardless of whether they are gross-out gorefests, serious period dramas or comedy gold they all have that central God Complex going on and Depraved is no different. Alex – Owen Campbelll – has had a fight with his girlfriend and on the way home is attacked and killed, but he awakes in a body and of others and is being called Adam (the creature is played with brilliant sympathy Alex Breaux). This creature has been constructed by Henry – David Call – a brilliant but demented field surgeon who is trying to prove his theories on how he can save lives on the battlefield. But it is all just waiting to go wrong as Alex/Adam starts to realise who and what he is. Depraved is a decent low budget take on the Frankenstein mythos, updating the situation in a modern context and relating the mad doctors work to the horrors of modern war. Like all the best Franken-films your sympathies are solidly with the monster as they are the true victims of the experimental surgeries and when revenge rears it’s head you are firmly on their side. A worthy addition to an ever-growing sub-genre of horror. 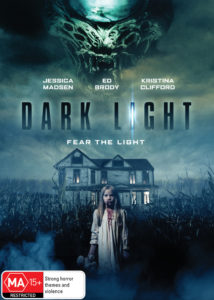 The quote on the cover states – Part Alien part Pumpkinhead – which really does sum this sci-fi horror up quite well but lets flesh that out a bit. Annie – Jessica Madsen – has just split from her husband Paul – Ed Brody – and with their daughter Emily – Opal Littleon – she has moved back into her family home. It’s a big old house in the middle of nowhere (things better not go wrong) surrounded by cornfields (things really better not go wrong) and so when strange lights start to appear in the fields and weird things start to happen in the house (uh oh) and little Emily disappears things have started to go wrong. But that’s not the half of it, Annie is convinced there are creatures in the house and surrounds and they have stolen her daughter and she needs to find her (as surprisingly no-one believes her). This won’t re-invent the horror wheel but it will keep you entertained for 90 mins and is a much better film than director Padraig Reynolds previous Worry Dolls. Yeah, it borrows heavily from Alien, Pumpkinhead, Children of the Corn etc but it’s a solid monster movie. The creatures look cool and you quite happily comp pop-corn and cheer on Annie as she goes on a monster hunt.