Nighting takes place on the Hopi Indian reservation, which like all Indian reservations, is technically not part of the United States, but that’s not stopping corporate American from stamping it with one of its most recognizable symbols. As our hero, Deputy Youngman Duran, approaches the community’s meagre medical hut, situated next to what I assume is a store; we clearly see the Coca-Cola emblem in full display for our cameraman’s trained lens. 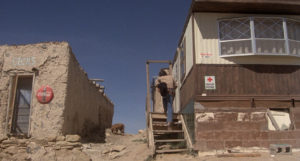 Actress, Judith Novgrod, is enjoying what looks to be a sizeable gulp of Coca-Cola while sitting around the campfire with her missionary group. However, their evening under the stars is about to be ruined by the film’s winged creatures. I do especially like the Coke cans from the 1970s as I find the almost burgundy colour aesthetically pleasing. Plus the thick-rimmed top and bottom give the can an appearance that looks impractical compared to today’s design. 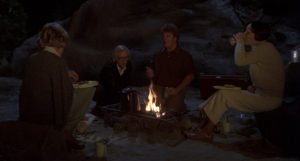 Nightwing is available on Blu-ray, paired with Shadow of the Hawk as part of a ‘Horror Double Feature’ from Eureka Entertainment in the UK. You can read my full review of the set right HERE, which includes a selection of screen-captures in addition to a breakdown of the technical specs and a summary of the bonus material.