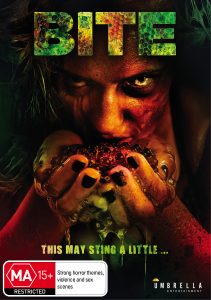 Last week an unexpected short day at work left me with some free time, so I sat down to watch a little horror film by the name of Bite, via Umbrella Entertainment’s On Demand streaming service. This fifth feature by Canadian director Chad Archibald is a cautionary tale about bride-to-be, Casey, who is bitten by an unknown insect while on a bachelorette party getaway in the tropics. Upon her return home it quickly become obvious that her seemingly harmless bite is something much more severe.

Despite some very ordinary performances from most of the cast, which I suppose was to be expected, the influence of David Cronenberg’s The Fly on this modern body-horror is very evident. As our protagonist undergoes a terrifying transformation, it in part serves as both a gross appetizer for genre fans and a graphic metaphor of one’s own insecurities and the burden of a strenuous relationship. Special effects are the film’s big selling point and are mostly practical in style, covering set pieces with various kinds of disgusting organic matter, accompanied with sounds of an equally unsettling nature.

There isn’t much to Bite other than a being a satisfying slice of conventional horror that appeals greatly to old-school audiences. If you’re after a physical copy you can find it on DVD at most major entertainment retailers and of course on Umbrella’s online store.